What to visit in Carboneras?

The Flea Market is held every Thursday, (except holidays that were moved forward a day before).

You can find everything at your stalls, such as Abundant Fruits of Time, vegetables of all kinds, clothing, Shoes, Music, Ornamentals, decoration items and household clothes, Hardware store, nuts and sweets, Delicatessen, Fur, Toy store, Crafts, Natural flowers, Etc.... 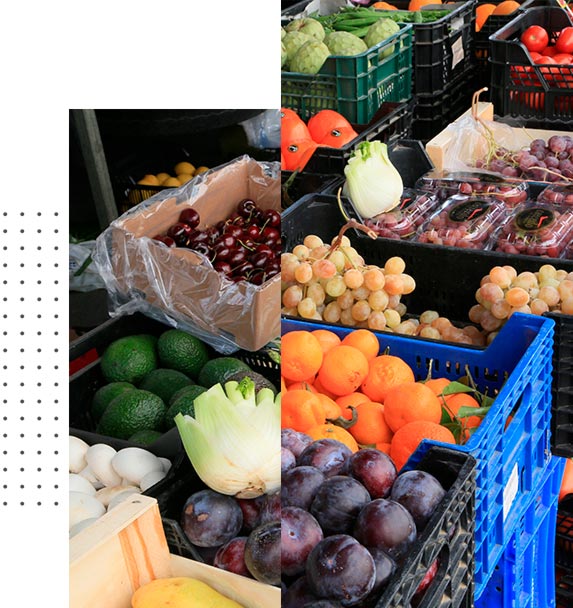 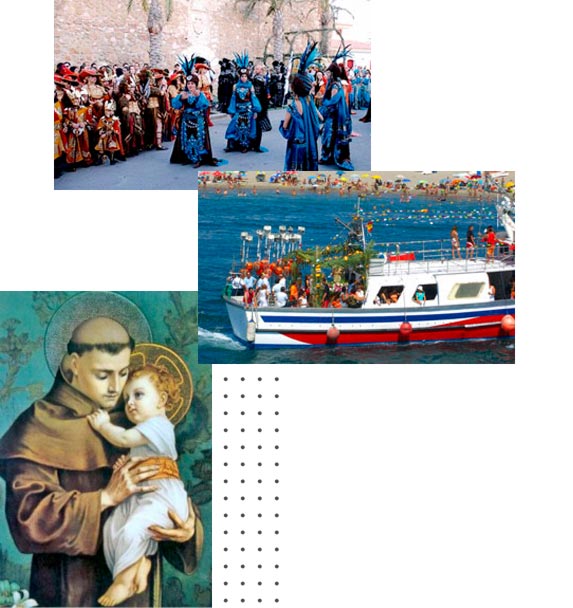 In mid-June, are the big parties of Carboneras

Our San Antonio festivities stage the memory of barbary attacks on our shores, as the popular memory picks up.

This act takes place for a single day, representing two days of clashes between the opposing sides. A total of a hundred men (fifty Moors and fifty Christians) dispute the image of the saint and the possession of St Andrew's Castle.

A landing of Arab troops is simulated on the beach "La Puntica" of Carboneras. On the ground, Christians are waiting for them, who have been alerted to their arrival by a lookout for the place. First thing in the morning, soldiers form in the village square, in front of St Andrew's Castle, starting the party with the recital of the Christian general, addressing their hosts.

Hidden behind St Andrew's Island, Arab ships are waiting, who will make their appearance soon after, until we get to the shore.

The event continues in the afternoon, giving luck a turn in favor of The Defenders of San Antonio, who get the final triumph over the infidels.

The Old Town of Carboneras originated thanks to the construction in the sixteenth century of the Castle of San Andrés.

It consists of beautiful white houses mostly located a few meters from the port and with wonderful views of the Mediterranean Sea. 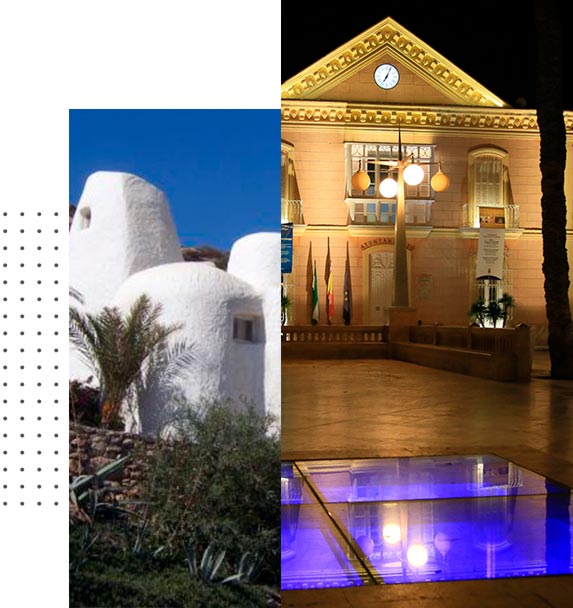 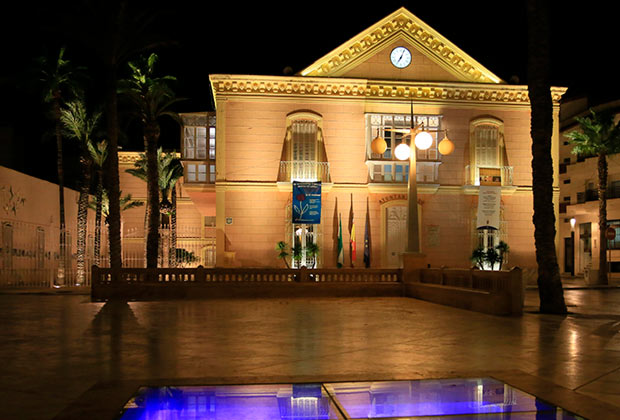 The Castle of San Andrés is the most important monument of the Municipality of Carboneras, symbol of the population.

It was erected in the sixteenth century by the Marquis del Carpio and later in the nineteenth century passed into the hands of the House of Alba. It is located in the old town, very close to the port, and it's a square-plan military fortress with four towers in its corners, three cylindrical and one square to the south.

On its cover, located on its half-point arch, highlights the Coat of Arms of the Marquises of carpio. It is declared a Monument of Cultural Interest.

It is located in the center of the Village of Carboneras, next to the roundabout and the Town Hall and the Andalusian park. It's a solid quadrangular masonry construction, able to withstand thick-caliber artillery. It has three cylindrical towers in the northern corners, east and west, and a large three-storey square tower at the south angle. Next to St Andrew's Castle, you will find a small park full of palm trees, who is grateful for the shadow they offer.

It is in a state of consolidated ruin. It's going to be restored shortly. It is owned by the Carboneras Town Hall, and is used in the development of cultural activities. It's open access, but to see the inside you have to contact the consistory.

It was declared a Good of Cultural Interest by the Resolution of 22 June 1993. Under the protection of the Generic Declaration of the Decree 22 April 1949, and the Law 16/1985 about the Spanish Historical Heritage. In the year 1993 the Junta de Andalucía granted special recognition to the castles of the Autonomous Community of Andalusia. 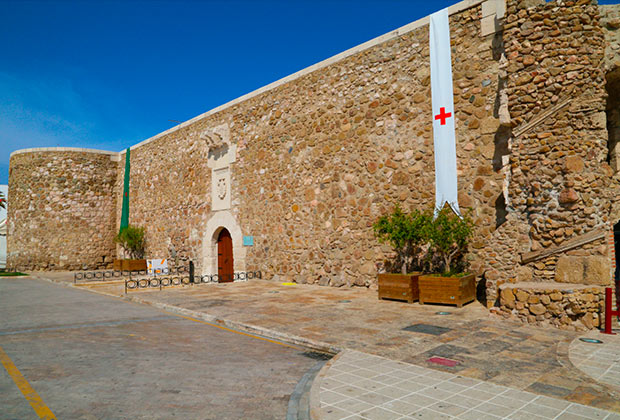 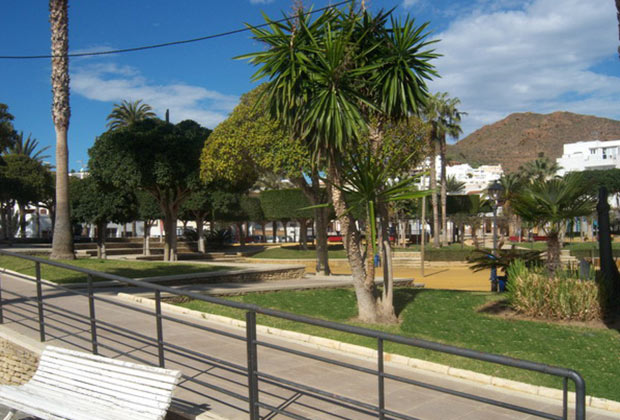 Patio Andaluz is a recreational park located in the surroundings of The Castle of San Andrés, on the banks of the Paseo Marítimo. It stands out for its beautiful gardens and for a beautiful 19th-century manor house that is located inside, the House of Shingles. It is an ideal place to stroll and rest on the shores of the Mediterranean Sea.

Jewel for diving lovers, is located in front of the town of Carboneras. It has great ecological value, with rich backgrounds and rich marine flora and fauna, refuge of numerous waterfowl. It has been declared a Natural Monument of Andalusia.

The island of San Andrés, is the island of Carboneras, located in front of the same village, on the Mediterranean coast of the province of Almería, Andalusia, Spain. The 1 October 2.003 was declared a natural monument by the Junta de Andalucía.

It is accessible from the ports of Carboneras and Aguamarga and the maximum depth of its waters is 10 mbnm.

These are two islets («Big Island» and «Isla Chica») volcanic origin off the coast of Carboneras, a 400 m from Puntica beach, adjoining the Cape de Gata-Níjar Natural Park.

The main natural value lies in the richness of its seabed. The dark color of its crystal clear waters is due to the considerable meadows of ocean posidonia that surround the bottom of the islets.

The bottoms are wild and in them can be observed the existence of a volcanic crater. There are a lot of caves and cracks in the rocky walls that accommodate a wide variety of marine species typical of the Mediterranean. They are abundant Castanets, Maidens, Spetons, Mere, Mojarras, Bent, Sargos and Tordos.

Many seabirds take advantage of the abundance of fish. Among the most numerous are seagulls, terns and sea swallows.
Vegetation on the surface of the islets is scarce and is linked to coastal flora. 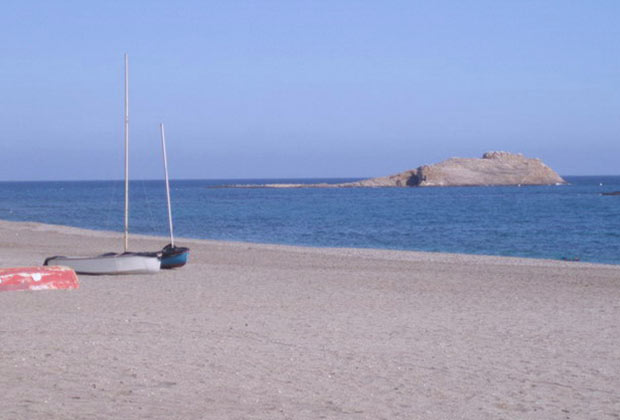 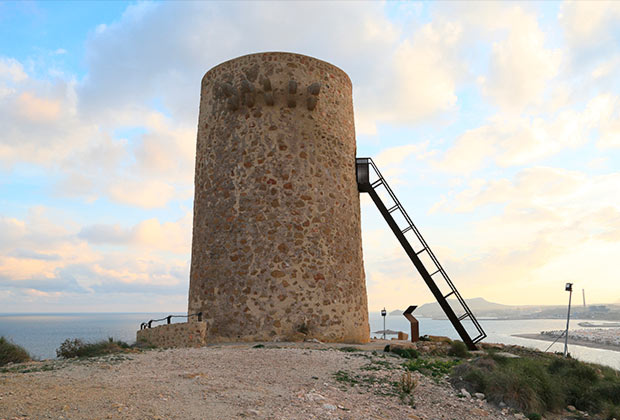 You hear about this tower or stay, From 1497, which makes him think he was already standing during the Nasrid era; was subsequently restored for use in defense of the coast.

It's a small tower, solid in its two-thirds and with a cabin at the top that was accessed with scale.

Located on the hill overlooking puntazo del Rayo, was taken care of, in principle, by two guards dependent on Vera and Mojácar's parties, who charged 25 daily maravedís.

Did 1525, hardly anyone wanted to work on this tower, for the obvious danger of being killed or held captive by the countless Barbary pirates who were arriving in the very depopulated area of carbonera cove.

In 1540 stopped putting guards in this tower for not finding anyone willing for it no long as they were paid, remaining the Carbonera area as an intractable point for Christians, who only appeared around sporadically, to hunt down or chase some Moorish fuse.

No further use is known, it would be intermittent while the barbary danger lasted.

In the mid-19th century, became dependent on Carabineros' body like all the castles in the area, being used for surveillance of smuggling on the coast. Did 1941 would give in to the Civil Guard, who took care of all the assets of that body. In 1949 would be protected by the state like the other Spanish castles and It is recently restored.

It's open access.
It was declared of Cultural Interest with the category of Monument (Code: 40660011). Under the protection of the Declaration of The 22 April 1949, and the Law 16/1985 about the Spanish Historical Heritage. In 1993 the Junta de Andalucía granted special recognition to the castles of the Autonomous Community of Andalusia.

House of the
Maze

Casa del Laberinto is located in front of Playa de las Martinicas. It was built by André Bloc in the year 1964. 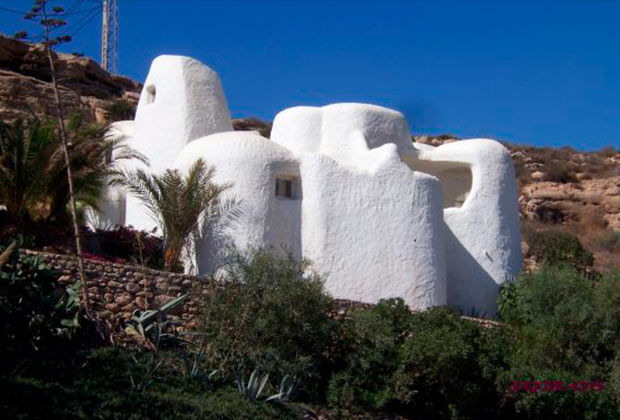 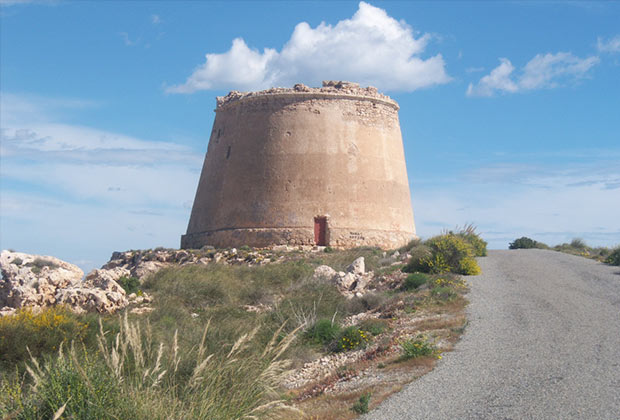 Mesa Roldán Castle was built in the eighteenth century along with other watchtowers for the defense of the area. Currently only one of its towers is preserved, known as Torre de La Mesa Roldán, located between Punta de los Muertos and Punta de Media Naranja, inside the Cabo de Gata-Níjar Natural Park. In its surroundings deserves special mention the Lighthouse of Mesa Roldán.

The Mesa Roldán Lighthouse is located on a flat summit hill of volcanic origin, located on the shores of the Mediterranean Sea. It is located at 222 m of sea level. It is the gateway to the Natural Park of Cabo de Gata.

It was built in 1.875, Prior to its construction, as there was a black lagoon between the cape lighthouse of Gata and that of Tiñoso, at the top of the watchtower bonfires were lit to warn of the steep coastline that protected.

This one like many of the headlights, it has also been receiving different remodels to adapt to the times, from a lamp with a burner from the beginning to a lamp with several lenses and electric of the new times.

It was electrified in 1973 and a complete equipment composed of optics is installed, mercury float base and watchmaking machine that should replace the previous equipment.

This lighthouse is located in one of the most beautiful and wild areas of the Almese coast, geologically it's a marvel, see as on a base of volcanic rocks that stand out from the sea, a discordant layer of white coral reef decals settles.

Around the lighthouse we can see a tower that has the same name and served as a surveillance of the coast, although its altitude relative to the sea line, I happen to be quite ineffective and eventually abandoned.

It has a range of 22 nautical miles. It is cared for and inhabited by a Farero. 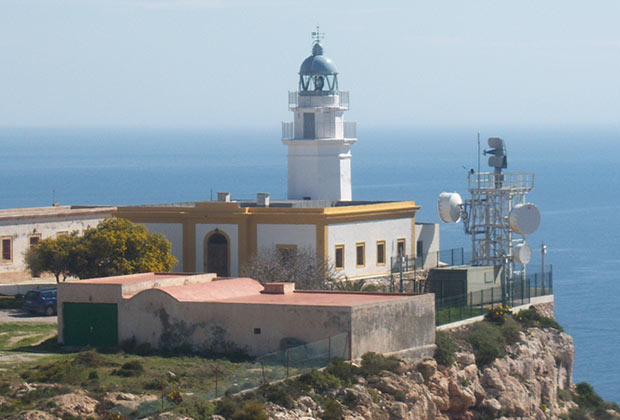 What to do in Carboneras?

In Carboneras you can Do Many Outdoor Activities such as Boat Rental ( Boat Ride and Routes), Kayaking tours, Jet Skis, Buggie Excursions & 4×4, Hidropedales, Diving (Schools), Get to know the West (Cinema*Fort Bravo Texas Hollywood Studios, Visit the Sorbas Caves, Buy Sea Amphora Replicas (made in Carboneras), Horseback Riding. Check out Our Tourism Promotions and Packages at Our Tourist Office.

We will make you enjoy an unforgettable day touring the wonderful places offered by the natural park on horseback, an animal that thanks to physical endurance and its intelligence has become one of the most appreciated specimens to travel these Sierras.

We will contemplate nature is its purest state, that will go beyond simple contemplation since through an expert guide we will be able to discover the richness of the fauna and flora of the mountains, its history and culture. 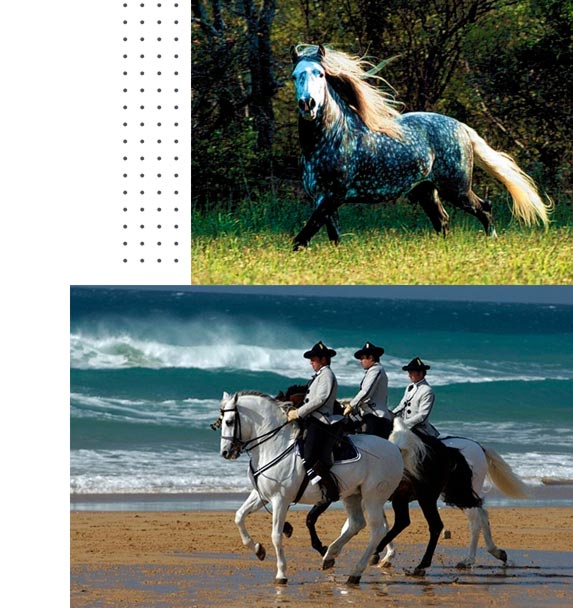 For all those who come to enjoy a few days to the Natural Park, you will be able to know this protected space with our Horseback Riding, carefully designed for children and adults.

Your First Lesson: How to ride a horse

We offer our experience in the sector of the real estate and of travel services.
Follow us on Facebook:
©inmobiliariasanchez.es All rights reserved

We use our own and third-party cookies to analyze our services and show you advertising related to your preferences based on a profile made from your browsing habits (such as, the pages visited). You can accept them all in "Accept", reject them all in "Reject" and set your cookie usage preferences in SET COOKIES. Some third-party cookies serve to make the website work properly, For example, the form on the Contact Us page, more info in SET COOKIES. 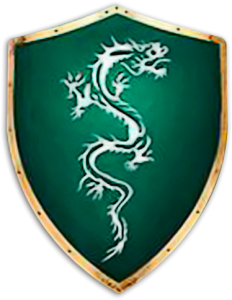 We use our own and third-party cookies to analyze our services and show you advertising related to your preferences based on a profile made from your browsing habits (such as, the pages visited). You can enable/disable strictly necessary own cookies and those of third parties at any time.

Read more about these cookies (Name, Type, Duration, Use, Etc.) and how to disable them in your web browser in our section: Cookie notices

If you disable this cookie we will not be able to save your preferences. This means that every time you visit this website you will have to turn cookies on or off again.

Please, first activates the cookies strictly necessary so that we can save your preferences!